On the 20 March 2020, I awoke after a lengthy dream. I had been in Pakistan, however, it did not look like the Pakistan I have seen in images and photos. Hope and peace were the pervasive feelings throughout the whole dream and so I know this is a word of incredible hope and lasting peace for Pakistan.

In my dream, I saw a Pakistan that may not necessarily exist in the natural but is God’s plan for this nation. The Father is speaking destiny and hope over this land. I also heard the Amanda Cook song “Closer” as I was waking from this dream. In particular, the words “I want to know Your heart” were ringing in my ear. I felt the Lord was wanting to give me a piece of His heart for Pakistan.

There were three images in the dream which really stood out to me. I’d like to now explain these three specific items as I believe they are linked directly to the destiny of this great nation. They are trees, roads and trains.

The trees I saw were highly unusual. Their leaves were an olive green colour with yellow tips on them. I believe the trees represent the nation of Pakistan and the leaves speak of new life and abundance just as the ‘olive leaf’ after the Flood spoke to Noah.

The dove came to him toward evening, and behold, in her beak was a freshly picked olive leaf. So Noah knew that the water was abated from the earth.

The Lord is doing something ‘new’ in Pakistan right now. The olive leaves symbolise fruitfulness, life and prosperity on the emerging nation, especially its economy.

It had fresh green leaves and was loaded with fruit for all to eat. Wild animals lived in its shade, and birds nested in its branches.

Holy Spirit is pouring out prosperity on the ministers and pastors of Pakistan. You will not just spiritually feed people; you will physically meet their needs as well. The Lord is the one giving the increase on ministries to provide for others.

The leaves of the tree were for the healing of the nations.

The Lord has called Pakistan to be the ‘healing balm’ for those nations. Hallelujah!

Holy Spirit reminded me of the term ‘bi-pinnate’ leaves. These are compound leaves which are often found in plants like ferns. The leaves of the trees looked very much like this. ‘Bi’ means two and I felt there was a twofold interpretation for these leaves–division/separation followed by multiplication.

At present, there is division and separation in Pakistan. It is not just within the government and society but also the church.

Two are better than one because they have a good return for their labor. For if either of them falls, the one will lift up his companion…And if one can overpower him who is alone, two can resist him. A cord of three strands is not quickly torn apart.

However, the Lord is releasing multiplication to those who stand under the banner of unity with Christ as the Head of the Church. This unity will impact the nation of Pakistan.

The olive-green leaves with yellow edges refer to an increased anointing and greater glory.

And I answered the second time and said to him, “What are the two olive branches which are beside the two golden pipes, which empty the golden oil from themselves?” So he answered me, saying, “Do you not know what these are?” And I said, “No, my lord.” Then he said, “These are the two anointed ones who are standing by the Lord of the whole earth.”

The Lord is releasing a greater anointing over church leaders in Pakistan who are committed to bringing the church together in their nation. This is the meaning of the olive green colour in the dream as Zechariah speaks of anointing oil. The yellow edges are the glory of God which is about to come upon Pakistani pastors and leaders in a greater measure than before. This will be unprecedented.

But these only reveal the sterling core of your faith, which is far more valuable than gold that perishes, for even gold is refined by fire. Your authentic faith will result in even more praise, glory, and honor when Jesus the Anointed One is revealed.

Pakistan has been through a real trial of fire of testing. The church has been through a very intense ordeal of separation and division, but the Lord is pouring out His anointing and greater glory. A continuous oil is being poured out upon leaders right now. The Father is saying this oil will not run out. There is an abundant supply of it. There isn’t anywhere Pakistani leaders will go that the whole surrounding area will not be affected by this anointing oil and the glory they carry.

Roads are going to bring a ‘turnaround’ 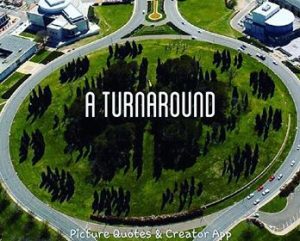 The roads I saw in my dream were very peaceful and well sealed. I observed many ’roundabouts’ in my dream. My Pakistani friends call them ‘circle roads’. These roads were places of serenity and tranquillity. The peace was pervasive. The Lord has decreed the peace of Pakistan.

In my discussion with Pakistani leaders, I have learned ‘peace’ is often epitomised as the white dove with the olive leaf in the mouth. Many Pakistanis keep doves or pigeons as pets to symbolise peace. Peace is the absolute, original destiny of Pakistan according to the Father. The peace of this nation is not just for Pakistan alone. The Lord is raising up Pakistan as a bearer of peace to the nations surrounding it.

The roundabouts or ‘circle roads’ indicate a turnaround of situation for Pakistan just as surely as a ‘circle road’ changes the direction of traffic. The relationship with China, Pakistan and the South Asian countries is set to shift as the Second Phase of a Free Trade Agreement with China will see an increase in economic prosperity for Pakistan.

In the dream, I saw well-developed train stations with double-decker trains in good, working condition. There

were many families at these stations. The families were embarking and disembarking the trains. The atmosphere was incredibly peaceful and full of hope. Many of the families, in particular the gentlemen, were dressed in Western clothing of about the early to mid-20th century–three-piece suits, polished shoes and bowler hats.

I heard the Lord say, “These trains represent vehicles of destiny here in Pakistan. These are my plans for her.”

“For I know the plans that I have for you,” declares the Lord, “plans for welfare and not for calamity to give you a future and a hope.”

The trains signify the plans of God for His people of Pakistan. The railroad platforms where people were embarking and disembarking trains symbolise a ‘waiting place’. This is the baptism of the Holy Spirit and fire poured out at Pentecost.

Gathering them together, He commanded them not to leave Jerusalem, but to wait for what the Father had promised, “Which,” He said, “you heard of from Me.”

Pakistan is in a ‘waiting season’. You are waiting on the promise and while it is very hard to wait for long-awaited promises, God’s timing is perfect.

The railway station is also a place of interchange and the Lord is declaring Pakistan is in a period of transition at the moment. The families at the station epitomise the unity of believers and a spiritual fellowship. This has really become prioritised through the COVID-19 lockdown as many believers have given generously to one another in a time of great need. The Father smiles upon these beautiful acts of service.

The man dressed in the ‘old-fashioned’, Western clothing, represents leaders and pastors in Pakistan being given renewed authority.

But the father said to his slaves, “Quickly bring out the best robe and put it on him, and put a ring on his hand and sandals on his feet.”

These robes are fresh glory upon the leaders and pastors in Pakistan along with the ring which is the seal of this renewed authority.

A double portion of prophetic and teaching ministry is about to explode in Pakistan. This is the significance of the ‘double-decker’ trains.  He is raising up prophetic and teaching voices along with the evangelists as a double-headed arrow advancing the Kingdom of God in Pakistan and its surrounding neighbours. Pakistani leaders shall be pushing back the darkness in the Name of Jesus! It will shake this nation to its core.

After receiving feedback from a Pakistani leader before releasing this word, I have been made aware of a Pakistani evangelist, Pastor Anwar Fazal of Eternal Life Ministries, who has been ministering powerfully across Pakistan for many years now. He wears Western clothing. I certainly see fire and glory on Ps Fazal and other leaders like him to bring about this destiny shift for the great nation of Pakistan.

Father, we thank You for the future of Pakistan. We call forth her destiny in the Name of Jesus. We call forth the peace, hope and unity of this nation. What You have spoken will surely not return to You void. Your Word will accomplish the purpose for which it was sent (Is. 55:11). Unite the leaders and pastors of Pakistan, Lord. Let fresh fire fall upon them and a renewed authority in the Name of Jesus. Let the mantle of glory You have ordained fall upon them now. We thank You these mantles will bring unity, blessing and abundance on Pakistan.

We take authority over and break the back of poverty in the Name of Jesus! Your people in Pakistan will be a light that cannot be hidden under a bushel. They shall be seen by the surrounding nations, especially China, India and Nepal. Lord, you are softening hearts and bringing Islamic leaders from surrounding nations under the light that will shine from Pakistan. Father, thank You for the intimacy and relationship you are building with leaders and pastors in Pakistan which will impact many. Surely it is time for Pakistan to arise and shine!

Arise, shine;
For your light has come!
And the glory of the Lord is risen upon you.
For behold, the darkness shall cover the earth,
And deep darkness the people;
But the Lord will arise over you,
And His glory will be seen upon you.
The Gentiles shall come to your light,
And kings to the brightness of your rising.

Scroll to Top
We use cookies to ensure that we give you the best experience on our website. Ok