When I saw this image about three weeks ago, I was deeply moved. This was the headline from a story written by Kieran Simpson: 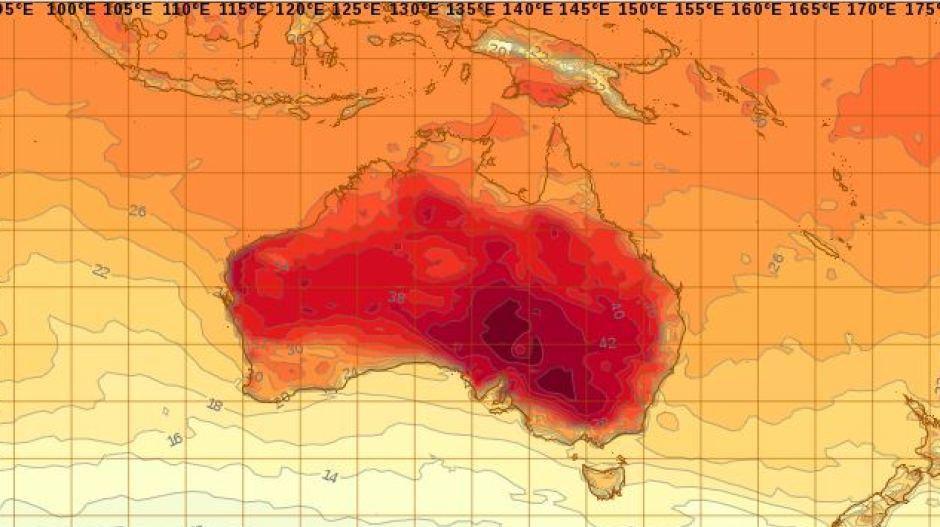 He went on to say the following:

There has been no rain today on Mainland Australia for the first time in history.

The unusual reading had the Bureau of Meteorology teams scratching their heads.

“The team can’t comprehensively identify a day in our records where there hasn’t been rain somewhere on continental Australia,” a bureau spokesman said.

Australia takes weather from all directions, which makes it a very rare occurrence for rain-bearing clouds to not hit the mainland.

As I said, I was deeply grieved by this image, but I heard Holy Spirit whisper, “Australia is on fire!“…

“I know Lord.”, I said. I’ve seen the pictures. Here are a few from The Atlantic posted by Alan Taylor on the 20 November, 2019. They are confronting…

These fires have been devastating, with hundreds of fires burning across the country, lives lost and hundreds of homes and livelihoods gone. Our Australian native fauna, especially koalas and possums have been severely affected too. And yet through this tragedy, I continued to hear in my spirit, “Australia is on fire!“…

The Lord said to me, “This is the sign of an outpouring of My Spirit on the Great Southland of the Holy Spirit. These fires in the natural are a sign of the fire of God burning in hearts across the nation at an unprecedented level.”

He told me the sign in the natural would be the “early and latter rains“. In Israel, “this represented rains in autumn (October-November) and spring (March-April).

“Therefore be patient, brethren, until the coming of the Lord. See how the farmer waits for the precious fruit of the earth, waiting patiently for it until it receives the early and latter rain” (James 5:7, NKJV).

Now, Down Under, our seasons are reversed. We’ve just entered summer and we have not had the usual rain at this time. We have had some rain further south in NSW breaking the back of many of the bush fires. We are awaiting some more rain in Brisbane. We had a dash on the weekend but we desperately need more.

I heard the Lord say, the “early and latter rains” i.e. the rains now and the rains in March/April, will signal a massive outpouring of His Holy Spirit. So get ready! We are on the verge of something we have never seen before…

I sense strong expectation in my spirit but also an urgency for us to be in the secret place of prayer for our nation. For those outside of Australia, please pray for us too. What is about to happen here is going to spread like “wild fire” and touch the whole earth. The earth needs the Australian apostles, prophets and teachers right now because we are called as forerunners of the next and I believe final Great Awakening.

“It is he who will go as a forerunner before Him in the spirit and power of Elijah, to turn the hearts of the fathers back to the children, and the disobedient to the attitude of the righteous, so as to make ready a people prepared for the Lord.” (Luke 1:17, NASB, emphasis mine).

Australian apostles, prophets and teachers are divine forerunners turning the hearts of the fathers back to their children. This is an awakening of church leaders and their true call to shepherd the people of God, rather than simply being caught up with “doing church”. They will also be awakened to righteousness and able to disciple the disobedient and rebellious back to the heart of the Father. This will happen both relationally as well as by an uncommon fire and authority on the apostles, prophets and teachers.

As the headline at the top of this word told us it “forgot to rain in Australia”, the Lord is saying, “I have NOT forgotten Australia! I am preparing hearts in the secret place. I’m equipping an army. Many of them are unknowns, but they are righteous radicals and they are sold out for the kingdom. Watch for the sign in the heavens of the early and latter rains.”

We have seen some early rains. This is just the beginning. The latter rains are not far off now. We must be ready. Our hearts must be surrendered in the secret place. Get excited! He is about to use you in a mighty way…

Father, in the Name of Jesus, pour out Your Spirit on us afresh. Let the fire of God fall on all who read this and on those desperately seeking You in the secret place. Father, we receive the blessing of rain. We have had some early rain, but we come into agreement with what heaven is saying. When the latter rains drench our dry earth, let this be a sign of hearts softened towards You. Father, we cry out for our nation! Heal our land! Forgive our iniquity and transgression. You are faithful and just and abounding in mercy. Use us righteous radicals to turn the tide in Australia, so Australia can in turn set the world on fire. Come Lord Jesus!